When imaging over long ranges, distortions introduced by the atmosphere severely degrade the resulting imagery. These distortions reduce effective resolution and exploitable information, leading to a loss of situational awareness and a general decrease in usefulness.

ATCOM is capable of enhancing images degraded by atmospheric turbulence, improving resolution and contrast, and allowing the viewer to perceive details that were formerly obscured. Imagery improved with ATCOM allows for more-accurate target identification at long distances, enhancing situational awareness and the performance of automated exploitation applications such as facial recognition and target tracking, all without costly investments in new sensors and optics or increasing the SWaP of current systems. 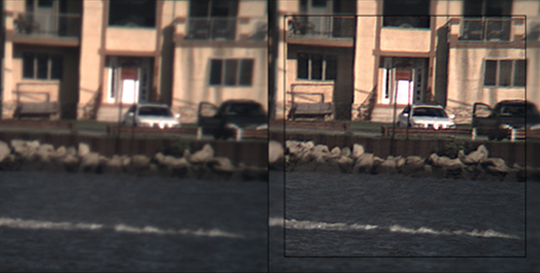 ATCOM works by combining information from multiple, temporally-adjacent frames to estimate a turbulence-free image. Our core algorithm is an extended version of the “Bispectrum Averaging Speckle Imaging” method, originally developed by Lawrence Livermore National Laboratory (LLNL). It has been shown to compensate for these atmospheric effects at both visible and IR wavelengths and has been proven to work under heavy atmospheric conditions (Rytov > 0.4). EM Photonics has extended this algorithm to work under real-world imaging conditions, where platforms and cameras undergo complex motions and observe unpredictable subjects.

Historically, sophisticated turbulence mitigations techniques have been too slow to deploy in real-time applications. EM Photonics has developed high-performance versions of these functions, without loss of quality, enabling its use in scenarios that demand real-time performance.

Turbulence Mitigation on Your Platform

ATCOM Turbulence Mitigation is capable of working within a variety of SWaP-limited deployments, allowing for its use in the most demanding scenarios. It is effective on multiple imaging bands, including visible and infrared.